“Fantasmic!” returns to Disneyland® Park on July 17, 2017! If you are looking for a delicious way to have reserved viewing for this classic nighttime spectacular, reservations for three new “Fantasmic!” Dining Packages are now available. There’s something for everyone, from on-the-go options to extravagant three-course dinners. 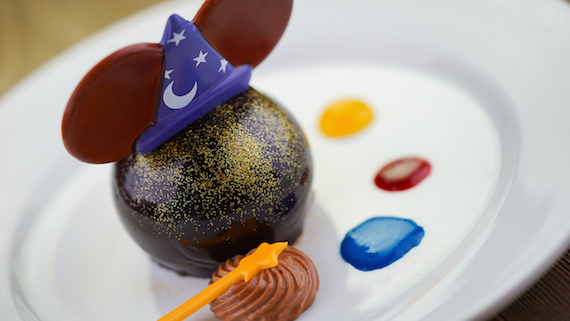 Blue Bayou Restaurant “Fantasmic!” Dining Package will include choice of starter, entrée, dessert and non-alcoholic beverage; cost is $65 for adults, $25 for children age 3-9.

River Belle Terrace “Fantasmic!” Dining Package will include choice of starter, entrée, dessert and non-alcoholic beverage; cost is $45 for adults, $25 for children age 3-9.

Twenty-five years ago, the Rivers of America at Disneyland® Park became the stage for the colorful tableau of Mickey Mouse’s imagination with the opening of the classic nighttime spectacular, “Fantasmic!” When it returns to Disneyland Park this summer, “Fantasmic!” will still be the treasured Disneyland Park experience guests have loved for 25 years – complete with its original fanfare and theme song – but all taken to brilliant new heights!

Upon its return, “Fantasmic!” will feature new magic, including new mist screens that will combine with innovative, state-of-the-art projection technology for brighter and more vibrant visuals than ever before. The show will also feature new scenes inspired by Disney animated classics such as “Aladdin”; one of the dazzling new scenes finds Aladdin and Jasmine floating over a bed of fog on their flying carpet during “A Whole New World.”

The official opening date for Fantasmic is still to come.

Guardians of the Galaxy – Mission: BREAKOUT! opens May 27 with Summer of Heroes and more at Disney California Adventure Park

Disney California Adventure® Park at Disneyland® Resort will soon be the destination for adventure, intrigue and triumph as recruits from around the world join forces with legendary Super Heroes in an ever-expanding universe of stories that will grow even bigger over time. This summer, Disney is kicking off the action with the May 27 grand opening of the thrilling, rocking attraction, Guardians of the Galaxy – Mission: BREAKOUT!

This new adventure blasts guests straight into the “Guardians of the Galaxy” story for the first time ever, alongside characters from the blockbuster films and comics. As guests help Rocket bust his pals out of the Collector’s Fortress, they’ll experience randomized ride experiences complete with all-new visual and audio effects and music inspired by the popular film soundtracks. Guests will never know which adventure they’ll get!

There will be even more ways to step into Super Hero stories with Summer of Heroes, May 27 through Sept.10, 2017. Guests can answer the call for this limited-time celebration as they join the Avengers and the Guardians of the Galaxy for all-new epic experiences.

Summer of Heroes will launch these new, year-round experiences:

And for a limited time, guests can step up to the challenge with new adventures during Summer of Heroes:

The summer brings even more to get excited about over at Disneyland park as classic favorites return with the reopening of the Disneyland Railroad and Rivers of America attractions, with the “Fantasmic!” nighttime spectacular returning later in the summer.

Let your Super Hero out!